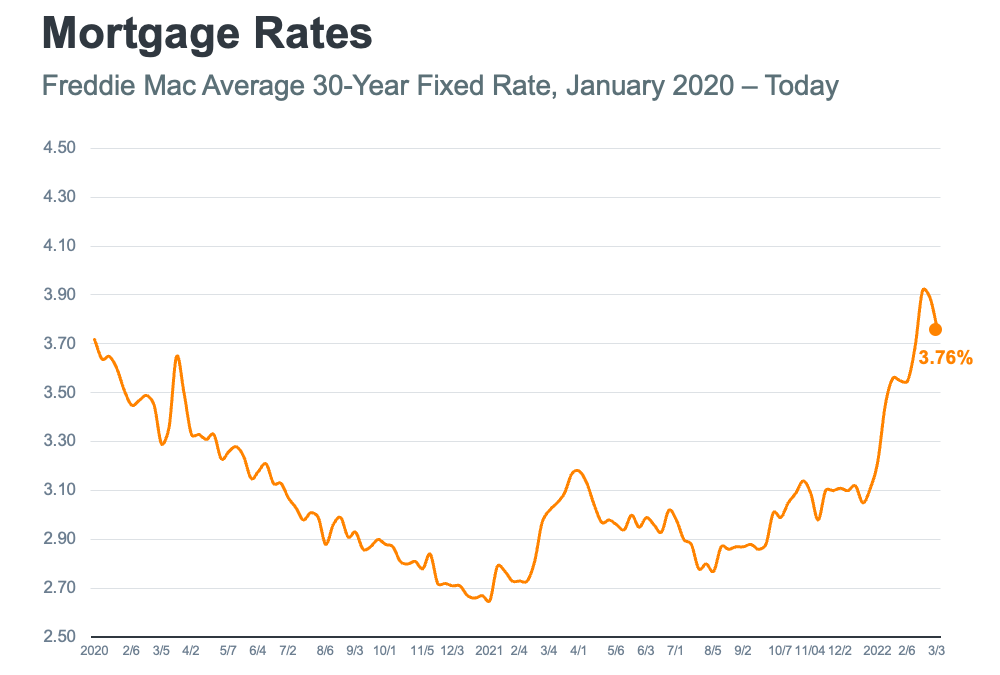 If you’re thinking about buying or selling  a home, you’ll want to keep a pulse on what’s happening with mortgage rates. Rates have been climbing in recent months, especially since January. And just a few weeks ago, the 30-year fixed mortgage rate from Freddie Mac approached 4% for the first time since May of 2019. But that climb has dropped slightly over the past few weeks (see graph below):

The recent decline in mortgage rates is primarily due to growing uncertainty around geopolitical tensions surrounding Russia and Ukraine. But experts say it’s to be expected.

Here’s a look at how industry leaders are explaining the impact global uncertainty has on mortgage rates:

“While mortgage rates trended upward in 2022, one unintended side effect of global uncertainty is that it often results in downward pressure on mortgage rates.”

In another interview, Kushi adds:

“Geopolitical events play an important role in impacting the long end of the yield curve and mortgage rates. For example, in the weeks following the ‘Brexit’ vote in 2016, the U.S. Treasury bond yield declined and led to a corresponding decline in mortgage rates.”

Kushi’s insights are a reminder that, historically, economic uncertainty can impact the 10-year treasury yield – which has a long-standing relationship with mortgage rates and is often considered a leading indicator of where rates are headed. Basically, events overseas can have an impact on mortgage rates here, and that’s what we’re seeing today.

Will Mortgage Rates Stay Down?

While no one has a crystal ball to predict exactly what will happen with rates in the future, experts agree this slight decline is temporary. Sam Khater, Chief Economist at Freddie Mac, echoes Kushi’s sentiment, but adds that the decline in rates won’t last:

“Geopolitical tensions caused U.S. Treasury yields to recede this week . . . leading to a drop in mortgage rates. While inflationary pressures remain, the cascading impacts of the war in Ukraine have created market uncertainty. Consequently, rates are expected to stay low in the short-term but will likely increase in the coming months.”

Rates will likely fluctuate in the short-term based on what’s happening globally. But before long, experts project rates will renew their climb. If you’re in the market to buy a home, doing so before rates start to rise again may be your most affordable option.

Mortgage rates are an important piece of the puzzle because they help determine how much you’ll owe on your monthly mortgage payment in your next home. 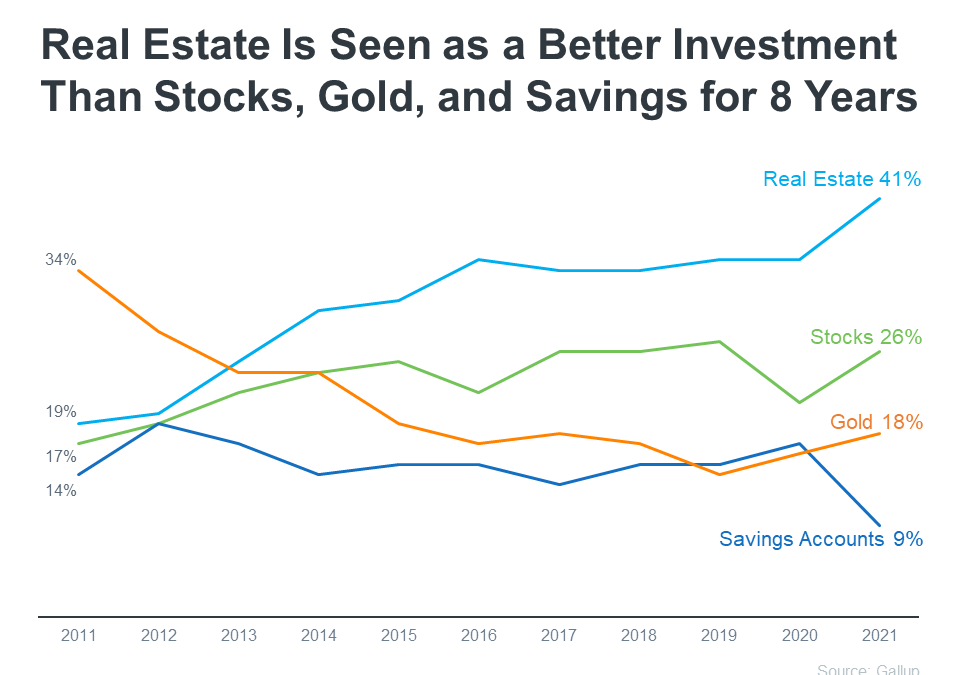 Real Estate Voted the Best Investment 8 Years in a Row

If you’re thinking about purchasing a home this year, this poll should reassure you. Even when inflation is rising like it is today, Americans agree an investment like real estate truly shines.

Why Is Real Estate a Great Investment During Times of High Inflation?

With inflation reaching its highest level in 40 years, it’s more important than ever to understand the financial benefits of homeownership. Rising inflation means prices are increasing across the board. That includes goods, services, housing costs, and more. But when you purchase your home, you lock in your monthly housing payments, effectively shielding yourself from increasing housing payments. James Royal, Senior Wealth Management Reporter at Bankrate, explains it like this:

“A fixed-rate mortgage allows you to maintain the biggest portion of housing expenses at the same payment. Sure, property taxes will rise and other expenses may creep up, but your monthly housing payment remains the same.”

If you’re a renter, you don’t have that same benefit, and you aren’t protected from increases in your housing costs, especially rising rents.

As a homeowner, your house is an asset that typically increases in value over time, even during inflation. That‘s because, as prices rise, the value of your home does, too. And that makes buying a home a great hedge during periods of high inflation. Natalie Campisi, Advisor Staff for Forbes, notes:

“Tangible assets like real estate get more valuable over time, which makes buying a home a good way to spend your money during inflationary times.”

Housing truly is a strong investment, especially when inflation is high. When you lock in a mortgage payment, you’re shielded from housing cost increases, and you own an asset that typically gains value with time.